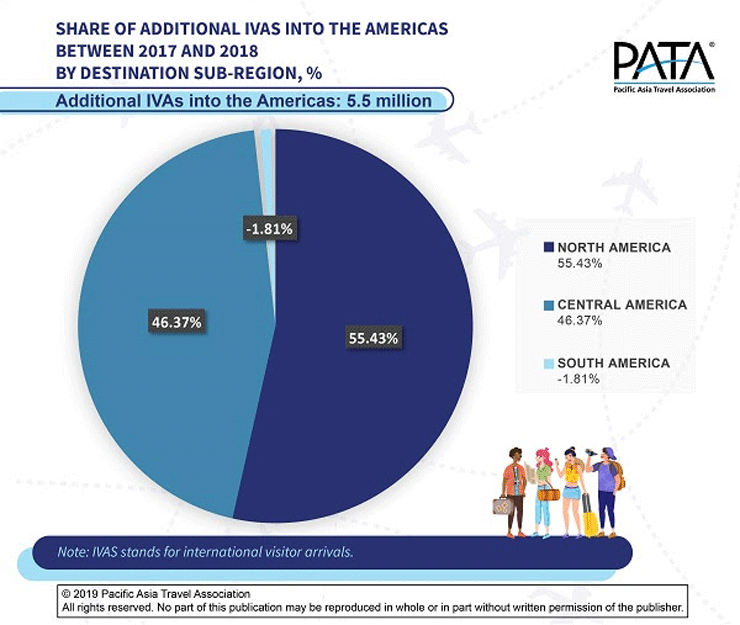 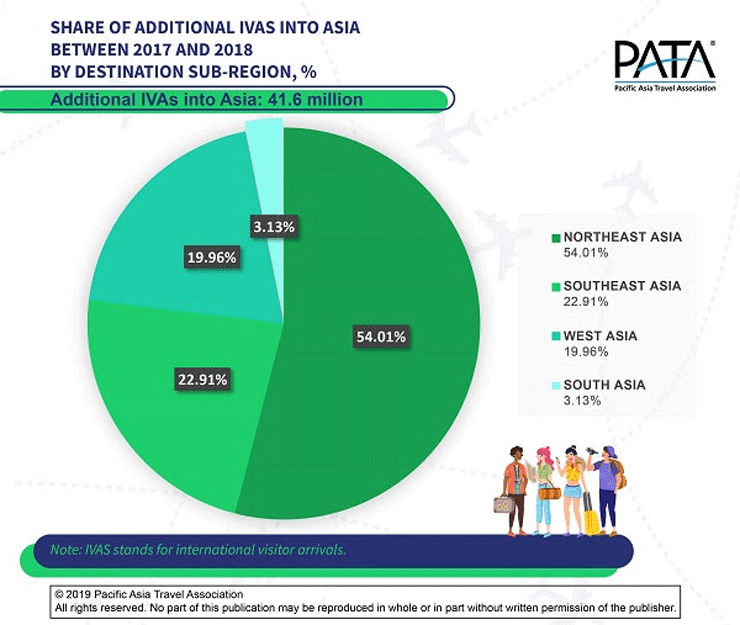 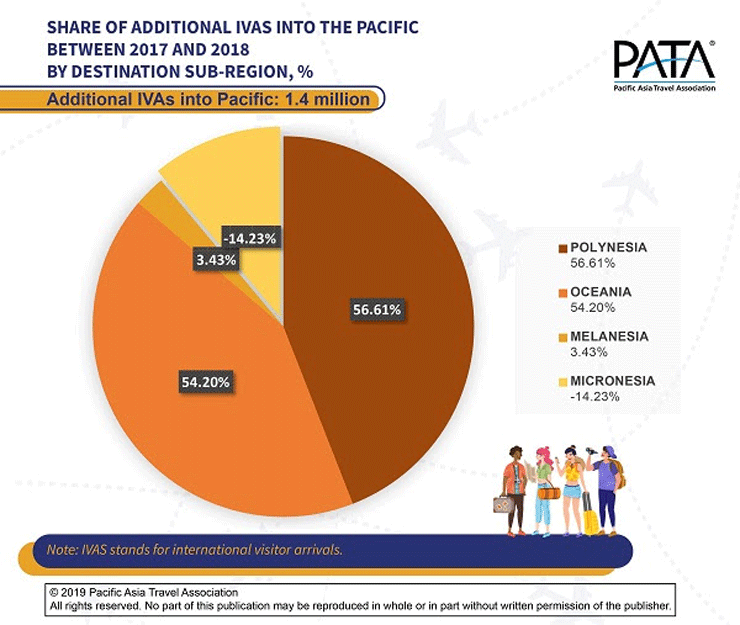 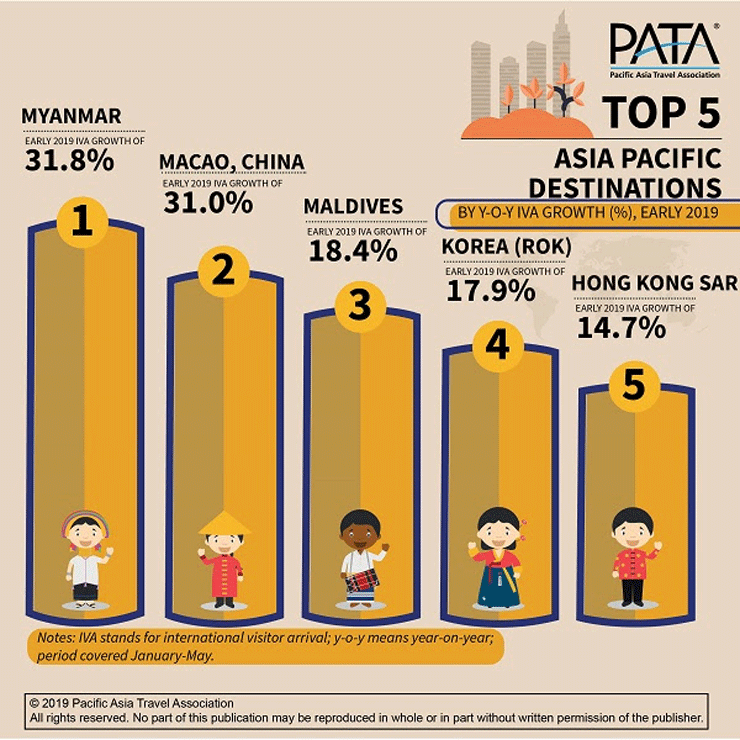 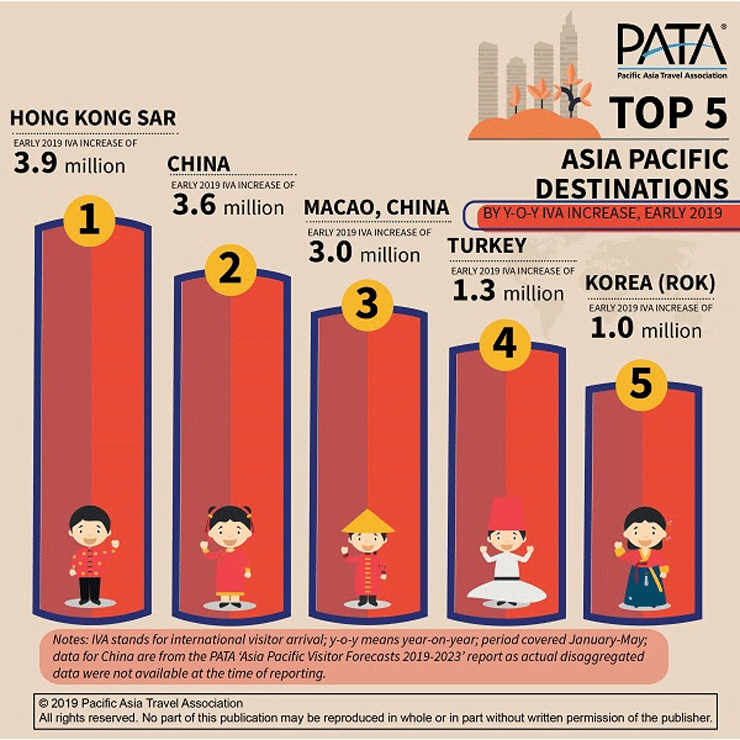 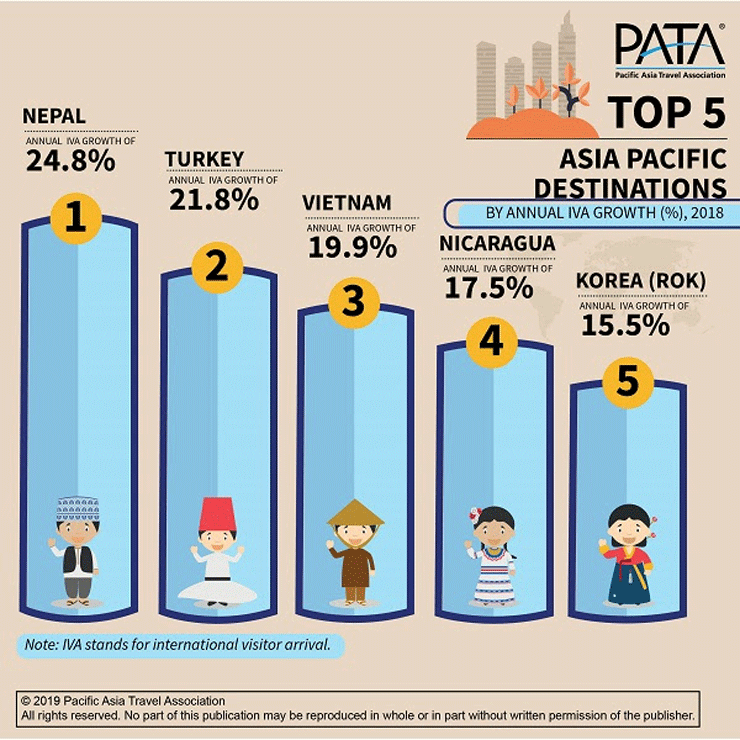 In percentage increase terms between 2017 and 2018, Asia had the strongest annual increase at 8.7%, followed by the Pacific at four percent and the Americas at 3.5%.

When adjusted for Guam and Hawaii – which appear twice, once as individual destinations and again as inclusions in the USA figures – the Asia Pacific aggregate performance still indicated an year-on-year increase of 7.3% in 2018 with a similar record high of close to 697 million IVAs.

According to the Annual Travel Monitor 2019 Final Edition (ATM) released by the Pacific Asia Travel Association (PATA) today, over the five years between 2014 and 2018, the 46 Asia Pacific destinations covered in the report have collectively seen their IVAs increase by almost 24%, adding more than 136 million additional arrivals to the collective foreign inbound count in the process.

In percentage increase terms between 2017 and 2018, Asia had the strongest annual increase at 8.7%, followed by the Pacific at four percent and the Americas at 3.5%.

Within the Americas, North America showed the strongest incremental increase in foreign arrivals between 2017 and 2018, capturing more than 55% of the 5.446 million increase over that period, followed next by Central America.

Of the 46 destinations covered in the report, more than a quarter (26%), had annual volume increases of more than one million IVAs each, while close to 37% had more than half a million apiece.

Nevertheless, the strong collective performance of Asia Pacific destinations in 2018 appears to be changing into 2019. As PATA CEO Dr. Mario Hardy pointed out that, “Preliminary results for early 2019 show a slight softening in the collective annual increase in foreign arrivals into 37 Asia Pacific destinations, reducing to 6.2% year-to-date, year-on-year. Even so, this growth rate has added almost 17 million additional arrivals to the total inbound count during the first periods of 2019 relative to the same period of last year.”

He concluded, “The impacts of various geo-political and natural changes appear to be affecting the global travel and tourism sector and we expect some significant changes in the Asia Pacific 2019 picture by the end of the year.”

Early 2019 data for foreign arrivals into 37 Asia Pacific destinations shows a general softening of growth relative to the same periods of 2018, dropping from a 7.3% increase in early 2018, to 6.2% in early 2019. Despite this, close to 17 million additional IVAs have been received between early 2018 and early 2019, reaching another record high of almost 288 million arrivals.

As Dr. Hardy pointed out that, “In general terms, the volume of foreign arrivals into most Asia Pacific destinations is still growing and therefore needs proper management protocols to ensure the long-term viability of those destinations.

He further added, “Broader, deeper and more timely performance metrics are now essential, in order to maintain both a competitive position and a proper management focus on the impacts of tourism. Such measures should include length of stay and yield as primary indicators, along with others that measure the health of the environment and society at all levels.”

Dr. Hardy concluded that, “In the broader sense, tourism should be balanced so as to offer the visitor an unforgettable experience, while also ensuring an appropriate and equitable dispersion of the benefits of that tourism across the resident population and of course the preservation of the environmental landscape.”