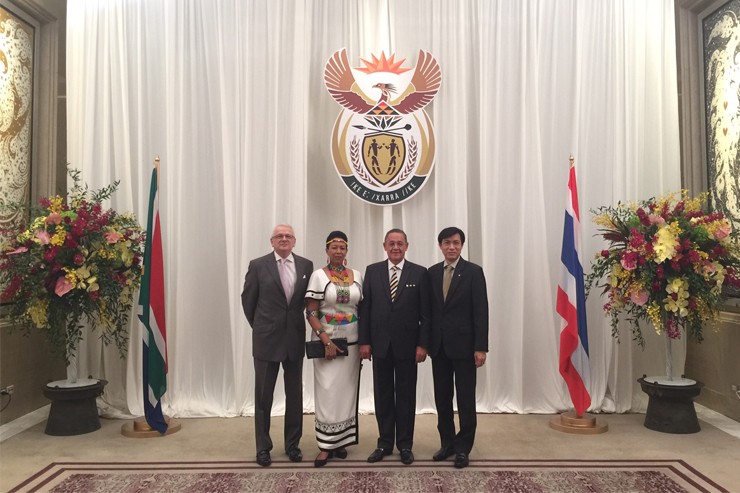 This year the Kingdom of Thailand and the Republic of South Africa, commemorate 25 years of cordial bilateral relations.

The speech was preceded by a moment of silence in respect to all those who lost their live in Sri Lanka in last week’s attack.

The Ambassador recounted that he and Carol called Sri Lanka home for five happy years and felt for all those affected. 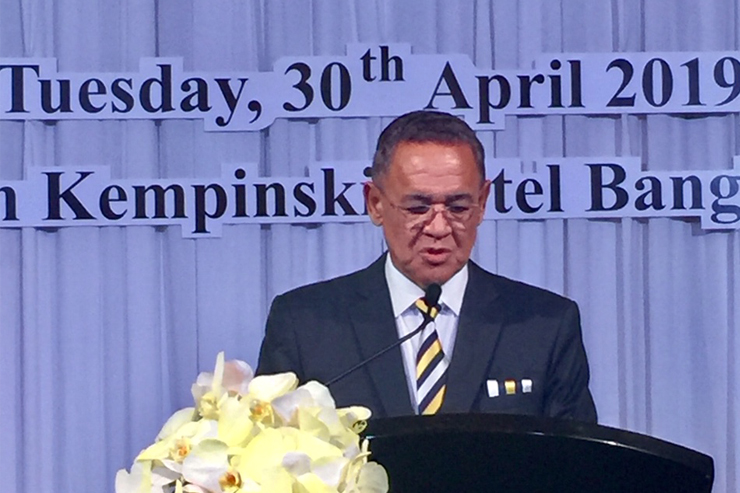 Representatives from the Royal Thai Government and Army

Ladies and gents and all the South Africans who have joined us this evening!

Before we commence with our formal proceedings, please join me in observing a moment of silence in memory of the many who have succumbed to the bombings in Sri Lanka.

I had the honour of serving in Sri Lanka as South Africa’s Ambassador for five and half years. South Africans stand in solidarity with all Sri Lankans during these trying times.

Freedom Day is the official, National Day of South Africa. On this day we celebrate one of the most significant political reformations in modern history.

Two great leaders of the time, President Nelson Mandela and President FW de Klerk provided outstanding leadership which brought about the peaceful termination of the apartheid regime and laid the foundation for a new democratic South Africa.

Both leaders were awarded the Nobel Peace Prize in December 1993 for their constructive policy of peace and reconciliation and for their commitment to the forces of good and to advance the country towards equality and democracy.

On May 08th South Africans will once again return to the polls, for the sixth multiparty, democratic elections. It is fitting to wish all of the 48 participating parties well in the upcoming elections.

The President of the Republic of South Africa, His Excellency President Cyril Ramaphosa, impressed that a central priority for government is to encourage significant investment in our economy, to stimulate economic growth and job creation. South Africa has entered a new era of hope and confidence.

This year the Kingdom of Thailand and the Republic of South Africa, commemorate twenty five years of cordial bilateral relations and both countries share a common desire to further strengthen and expand relations in the areas of trade, investment, agriculture, tourism and people-to-people cooperation.

The Kingdom of Thailand is South Africa’s largest trading partner in ASEAN and we are Thailand’s most significant trade partner in Africa. South Africa is open to investment and is currently engaged with Thailand on investment opportunities in a range of sectors.

South Africa, congratulates Thailand on its recent elections and conveys its best wishes for the completion of the roadmap to democracy.

My appreciation also goes to the Assumption University Chorus and School of Music, as well as Fivera.

Distinguished guests, ladies and gentlemen,
We will now have the Royal Thai Anthem.

I now request you to join me in proposing a toast to His Majesty King Rama X, for a successful coronation, for a long life, good health, prosperity and the gift of wisdom.

Please remain standing,
We will now have the South African National Anthem.

I now request you to join me in proposing a toast to His Excellency Cyril Ramaphosa, and wish him a long life, good health, prosperity to the President of the Republic of South Africa.

English born Andrew J Wood, is a freelance travel writer and for most of his career a professional hotelier. Andrew has over 35 years of hospitality and travel experience. He is a Skal member and a hotel graduate of Napier University, Edinburgh. Andrew is also a former member of the Executive Committe of Skal International (SI), National President SI THAILAND, Club President of SI BANGKOK and is currently SI Asia Area a.VP Southeast Asia (SEA), and Director of Public Relations Skal International BANGKOK. He is a regular guest lecturer at various Universities in Thailand including Assumption University's Hospitality School and the Japan Hotel School in Tokyo.